Young and Single in Regency Brighton 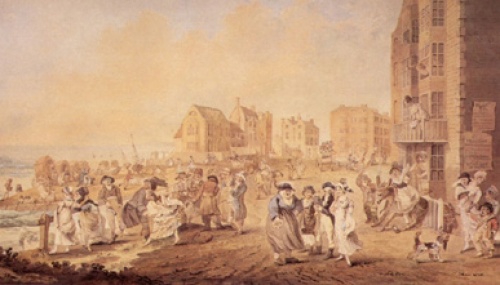 On arriving in Brighton young ladies headed straight for a library, such as Baker’s on the Steine or Tuppen’s on Marine Parade. There, they signed the visitors’ book announcing they were in town and, of course, looked to see who else had arrived.

Once established, they spent their days promenading, taking part in events on the Steine, or visiting the libraries which were like clubs where they could buy or borrow the latest novels or gossip and play cards. The sea was also used for entertainments such as yacht races and water parties, which were watched from the shelter of the Steine. Military manoeuvres on the Steine and the Downs were also popular, as were the dashing young Infantry Officers, in their red wool jackets, who were in barracks in Church Street and Preston village.

“A soldier’s coat should always be tight over the breast (without restraint) for the sake of shewing his figure to more advantage.” Bennett Cuthbertson

But the activity most visitors associated with Brighton was bathing. Young ladies did not, however, consider this an amusement, but a necessary pastime for good health. They undressed in a bathing machine, which was pulled by a horse or wheeled into the water. There they descended to be immersed by a female attendant called a “dipper”. Martha Gunn was one such dipper. Many women bathed naked, others wore long flannel dresses – which was probably a good idea bearing in mind the number of people who liked to watch them through telescopes!