THE SPIRIT OF BRIGHTON 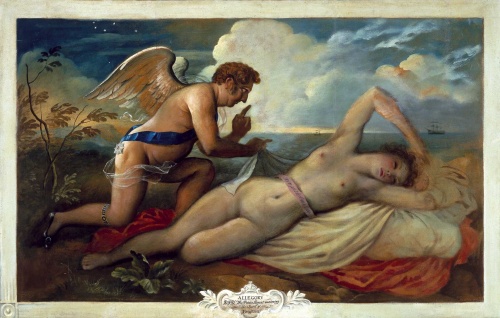 Rex Whistler, HRH The Prince of Wales Awakening the Spirit of Brighton

Preston Park Avenue was developed from the 1880s with large red brick villas, many of which remain, but several have been replaced with blocks of flats. Whistler Court is one of these; its name commemorates the decorative artist, Rex Whistler.

As I missed the retrospective, Rex Whistler: The Triumph of Fancy held in the Brighton Museum and Art Gallery in 2006, I thought I should ‘check him out’. I found a man who had a glittering career as a painter, illustrator, muralist and stage designer for theatre, ballet and opera. Described as an elegant, debonair figure who possessed both wit and charm, he moved within the most brilliant literary, social and artistic circles of his time and was a member of the set, which became known as “Bright Young Things”. What I also found was a connection to our own Preston Park Avenue and a tragic tale of outstanding talent killed in war.

The full extent of his achievement in the context of his life and times is remarkable. Born on 24 June 1905 in Eltham, Kent Reginald John ‘Rex’ Whistler first achieved fame at the age of only 22, with his mural decorations for the Tate Gallery restaurant; this architectural fantasy immediately established him as the leading painter of his generation.

When war broke out, Whistler was eager to join the army. However, he wrote to a friend that he feared he might not be a very good soldier. He hoped, he said, that he might be able to perform with paint and brush and be of some use in preparing landscape targets. He was commissioned into the Welsh Guards as Lieutenant 131651 and found that rather than being a hindrance to his military career his artistic talents were greatly appreciated.

In the build up to D-day the army spent a great deal of time in billets around the country and Whistler found himself in all sorts of houses and huts, most of which Colonel-in-Chief of the Welsh Guards, Sir Alexander Stanier, told the Brighton and Hove Herald, ‘had dirty and bare walls, all of which he changed in the most miraculously short time into the most pleasant rooms you could wish to have’ (23 June 1945).

When Whistler arrived at 39 Preston Park Avenue, he followed his normal practice and set to work painting mural decorations on the walls of a room used as the officers’ mess. One painting occupied most of an entire wall and depicted the figure of the Prince Regent, naked except for the blue ribbon of the Garter, with the badge of the Order resting on his buttock, kneeling before the reclining figure of a sleeping figure, who wore round her waist as blue girdle bearing the name Brighthelmstone. Below was the title, ‘Allegory: HRH The Prince Regent Awakening the Spirit of Brighton’. In one corner was written ‘Rex Whistler June 5-7, 1944’. On the opposite wall a mural decoration in the chinoiserie style of the Royal Pavilion in the centre of which was an oval medallion containing a silhouette portrait of George IV surrounded by an inscription containing reference to the artist’s name, ‘Georgius IV Rex’. On the end wall of the room was a large crest of the Welsh Guards.

Soon after this work was completed, Whistler was sent to France. In July, he was with the 2nd (Armoured) Battalion in Normandy. On the 18th, his tank drove over some felled telegraph wires beside a railway, which became entangled in the tank tracks. He and the crew got out to free the tank and a German machine gunner opened fire on them, preventing them from getting back into their tank. Whistler dashed across an open space, but a mortar bomb exploded beside him and killed him instantly. He was the first fatality suffered by the Battalion in the Normandy Campaign.

What happened next to Whistler’s last paintings was described by the local paper as a ‘controversy’. They reported that following his death all agreed that the paintings should be preserved, but when ‘The Spirit of Brighton’ was taken down from the wall a dispute arose as to whether this and the other mural paintings belonged to the owner of the house, the military authorities who had the premises under requisition or the Corporation. What seemed like an intractable problem was finally resolved when the army relinquished their claim and the Corporation purchased the picture from the house owner and agreed that the crest could pass into the possession of the Welsh Guards - a decision that was in accord with the wishes of the artist’s mother. However, the silhouette portrait of George IV, surrounded by its decoration of bamboo plants, birds and butterflies, was not removed from its original setting until April 1950, when it was purchased from the owner of 39 Preston Park Avenue by the Brighton and Hove Herald and presented to the Corporation for exhibition in the Royal Pavilion.

The allegorical study of George IV awakening the spirit of Brighton now hangs just outside the tea rooms in the Royal Pavilion and is a fine tribute to Whistler - a tragic, romantic genius and quintessential icon of the inter-war years - who lived and worked, if only very briefly, in Preston Park Avenue