A Short History of Gin 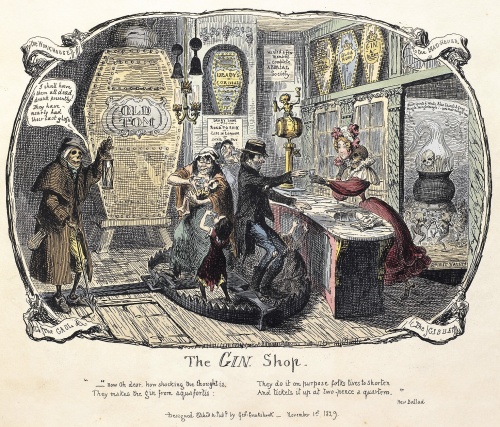 Gin, cursed Fiend, with Fury fraught, Makes human Race a Prey. It enters by a deadly Draught And steals our Life away. Virtue and Truth, driv’n to Despair Its Rage compells to fly, But cherishes with hellish Care Theft, Murder, Perjury. Damned Cup! that on the Vitals preys That liquid Fire contains, Which Madness to the heart conveys, And rolls it thro’ the Veins. Poem accompanying the first edition of William Hogarth’s depiction of urban desolation peopled by gin-crazed Londoners, Gin Lane, from Beer Street and Gin Lane, 1751.

In the 18th century, long before effective water purification and treatment systems were discovered, quenching the thirst could be hazardous, even deadly. Historically most people consumed ale or light beer, the wealthy enjoyed wine, children were given milk and paupers usually had to drink unsafe water. Enter alcoholic spirits, notably gin - affordable and widely available. Vendors roamed the streets pushing handcarts loaded with gin that, costing only one penny a quarter-pint, was far cheaper than either beer or ale. Gin temporarily disguised the feeling of cold and the hunger pangs of the poorest and most vulnerable in Georgian society: it also led to crime, debt, unemployment, neglect and death. Women, particularly, often bought gin as a medicinal drink to soothe the nerves, possibly giving rise to the epithet ‘Mother’s ruin’, although its precise origins are debateable.

Gin is a distilled alcoholic drink that derives its main flavour from juniper berries (Juniperus communis: the common juniper). It is a broad category of spirit, having diverse origins and embracing various flavours, but all types use juniper as the common ingredient. English gin probably originated with the older Dutch liquor, genever - the juniper-flavoured national liquor of the Netherlands and Belgium. Initially it was produced in the Low Countries by distilling malt wine to 50% ABV, but distilling techniques were then primitive, the resulting spirit unpleasant tasting, so herbs were added to improve the flavour. The juniper berry - jeneverbes in Dutch (hence the name jenever, Old English genever and later ‘gin’) – had traditionally been used for its alleged medicinal properties, but by the early-1600s the Dutch were levying taxes on jenever and similar liquors as alcoholic drinks, indicating that jenever, no longer considered primarily a health-giving remedy, was becoming a commercial commodity in the spirits industry.

The British relationship with Dutch gin may have begun with the English soldiers providing military support in Antwerp against the Spanish in 1585, during the Eighty Years’ War. Reportedly they took to drinking genever for its calming effects before battle, a habit that reputedly gave rise to the term ‘Dutch courage’. Shortly afterwards gin emerged in England in varying forms and at the time of the Restoration in 1660 enjoyed even greater favour, becoming a popular alternative to brandy after William of Orange became King of England, Ireland and Scotland in 1689.

English gin drinking soared when the government permitted unlicensed gin production, simultaneously imposing a hefty duty on all imported spirits, including French brandy. This fuelled the home market for low-grade barley unsuitable for brewing beer, and during the early-1700s thousands of English gin-shops sprang up, ushering in a period known as the Gin Craze. Because of the cheap cost of gin, compared with other beverages, gin began to be consumed regularly by the poor. Of the 15,000 drinking establishments in London (excluding coffee and drinking chocolate shops), over half were gin shops. Whereas low-alcoholic beer retained a respectable reputation as a safe alternative to water, gin was blamed directly for the various social problems of the age. It was the comparative reputation of the two drinks that popular artist William Hogarth illustrated in his didactic engravings Beer Street and Gin Lane (1751) with which we began this article. Described by the BBC as “arguably the most potent anti-drug poster ever conceived”, Gin Lane depicted in graphic detail the inevitable slippery slope from the glass to the grave. In early-18th century London, much gin was produced in illegal pot stills inside residential houses and cruder forms of the drink often used turpentine or sulphuric acid in addition to juniper. These were relatively sweet-tasting gins, as was the Old Tom Gin, a soft gin which often incorporated sugar. Some of the typical Georgian gin styles may also have had additional alcoholic and analgesic effects, adding to their popularity.

Eventually the development of the modern column still during the late-1820s/early-1830s facilitated the distillation of neutral spirits, thus prompting the creation of the famous ‘London dry’ gins. It was also during the early-1800s that gin and tonic water became familiar partners. In British colonies in India and elsewhere in the tropics where malaria was prevalent, gin was used to disguise the bitter flavour of quinine. Quinine, the only effective anti-malarial compound, was dissolved in carbonated water to form what became known as tonic water. The resulting cocktail drink was thus gin and tonic or G & T – still enjoyed today, albeit today’s tonic water usually contains only a trace of quinine as flavouring.

Although a superior, more respectable drink than the dangerously cheap, inferior gins of Georgian London, gin retained an edgy reputation into the early 20th century. Due to the relatively simple methods used in gin production, clandestine ‘bathtub gin’ was widely available in the speakeasy bars of Prohibition-era America. Mixed alcoholic drinks or cocktails were all the rage during the Roaring Twenties, with gin a common base spirit for many fashionable drinks such as martini (gin and vermouth) and the ‘gimlet’, a cocktail of gin and lime juice. Gin remained a traditional spirit, especially among older drinkers, before suddenly experiencing a dramatic revival worldwide in the past 5 or 6 years. Many new brands and producers now lead innovation and change, including novel coloured and flavoured gins that appeal to a wider, more youthful market. Many English towns and cities have also created their own, uniquely packaged local brands of gin, including our home city. Brighton Gin, distilled using pure and local ingredients, stylishly presented in largely recycled glass with a cool turquoise label, is an award-winning British craft gin distilled and bottled by hand here by the sea. A big favourite this summer… Chin chin.