In the Shade: A History of Parasols 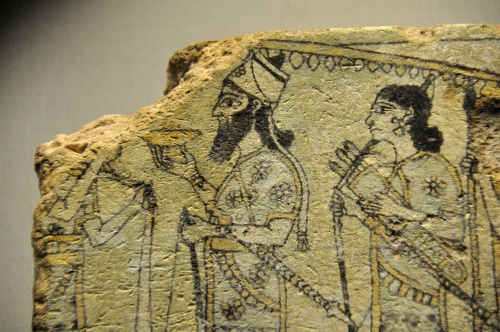 This detail of a glazed terracotta tile from Nimrud, Iraq, illustrates the Assyrian king below a vast parasol borne by attendants, c.875-850 BC [Wikimedia Commons]

Parasols closely resemble umbrellas - and for good reason. The word ‘umbrella’ derives from Latin umbra (‘shade’) and initially the shade-giving device was used as essential protection from the sun. Ancient sculptures dating from around the 11th century BC reveal sunshades being used over 3,000 years ago in Egypt, India and the Middle East, and later they were adopted by the Ancient Greeks and Romans. Initially inspired by the shady canopies of trees, the first portable sunshades used in hot climates were literally large fleshy leaves, such as banana leaves, or even a converted tree branch.

The word ‘parasol’, from Latin papare (to prepare) and sol (sun), also signified a sunshade, but there was a significant difference between a personal umbrella held by the user and the larger parasol held over a person of distinction, by a servant. Indeed, from early on sunshades were associated with social rank, vast parasols becoming potent symbols of status and power throughout Asia and Africa, where fair skin signified high birth. Ceremonial parasols carried by attendants in public processions helped to preserve the pale complexions of the elite, thereby reinforcing their entitlement to rule. For this reason, the use of such emblems could be subject to the law, for example in Assyria, where only the king himself could use a parasol.

So important was the stately parasol that in some societies its form became highly significant. In particular, a large number of tiers implied great wealth and prestige, the Emperor King of Siam (Thailand)’s parasol boasting seven or nine tasselled and fringed tiers. Playing a key role as a traditional accoutrement in the ceremonial regalia of many Asiatic and African rulers, the parasol is also considered deeply symbolic in certain religions: for instance, the chatra (from the Sanskrit word for ‘umbrella’) is an auspicious emblem in Hinduism, Jainism and Buddhism, being associated with various deities. In the west, a ceremonial umbraculum with a striped canopy has been used by the Pope since the 15th century, embodying the Roman Catholic Church and the Pope’s authority.

By around the 1600s, personal sunshades were becoming customary in Mediterranean Europe, chiefly among women, and it is believed that Catherine of Braganza in Portugal popularised hand-held parasols among English ladies following her marriage to King Charles II in 1662. From the late-1700s onwards, a more pronounced distinction was drawn between functional umbrellas used for protection in the rain and picturesque parasols or sunshades carried to guard against the sun’s glare and heat. Whilst the harmful consequences of over-exposure to the sun’s rays were not yet fully understood, the visible effects of sunburnt or freckled skin - directly associated with the working classes who laboured outdoors - were generally avoided at all costs in polite society. Genteel ladies went to great lengths to preserve the pale, feminine complexion expected of their rank and sex, and as more outdoor leisure pursuits developed, parasols became both a necessity and a major fashion accessory throughout the 19th and early 20th centuries.

During the late-Georgian and Regency periods, fabric parasols tended to be rather utilitarian and plain, typically formed of long wooden sticks, perhaps with an ivory handle, and featuring green or brown silk twill covers, although small summer parasols might match the shade of a gown or pelisse coat. Parasols occur frequently in Jane Austen’s novels and letters: for instance, in Sanditon, her unfinished novel of 1817, Mrs Parker was concerned about the children playing outdoors in the sun and declared that she would ‘…get Mary a little Parasol, which will make her as proud as can be…she will…fancy herself quite a little Woman.’

By the early Victorian era, a period of demure, dainty fashions, parasols were typically small, lightweight and the focus of elegant display. Extant parasols in museum collections reveal that sticks and handles ranged from turned wood to elaborately carved ivory and coral. Some diminutive ‘carriage’ parasols were made with folding sticks; covers were colourful and fashioned from myriad materials, including woven, printed and hand-painted silks, embroidery and lace, beadwork and various novelties such as raffia and even feathers.

During the 1860s and 1870s, following wider fashion trends, parasols grew larger and bulkier, perhaps bright-coloured and showy to match a favourite purple, emerald or chestnut gown, some ornately trimmed and fringed. Throughout the 1880s and 1890s, they became generally long and slender, often appearing exuberant with ruched chiffon, lace flounces, and ribbon, while white, frothy parasols were especially popular for summer occasions. Conversely, the late-Victorian vogue for Oriental style also favoured picturesque Japanese- or Chinese-effect parasols fashioned with slender wooden or bamboo sticks covered in painted paper or silk. Parasols remained both fashionable and functional in the early 20th century. A large parasol or sunshade could be installed in the garden to shade lounging chairs or a tea table, while ladies carried parasols to match a favourite outfit: indeed a formal summer costume was not complete without a co-ordinating parasol. Oriental-inspired parasols with wooden, ivory or lacquer handles and flat, circular paper or silk shades, remained popular during the 1910s and 1920s, following the prevailing art deco aesthetic for picturesque styles drawn from many cultures. Other parasols from the mid-1920s were more robust, featuring sturdy sticks with quirky handles and dome-shaped fabric covers in vivid colours, accentuated by bold geometric trims.

Only from the later 1920s onwards, following the lead of socialites who frequented the glamorous beaches of California and the French Riviera, did it become fashionable to acquire a suntan. Within just a few years, as more ordinary British people enjoyed a summer holiday and beachwear grew more streamlined, golden flesh was no longer the dreaded emblem of outdoor manual labour, but expressed fitness, health and leisure time. With a few exceptions, parasols disappeared from fashion and the pale, languid lady sheltering in the shade emerged from the shadows - walking, swimming, playing sports, embracing the sun and the great outdoors. www.jayneshrimpton.co.uk 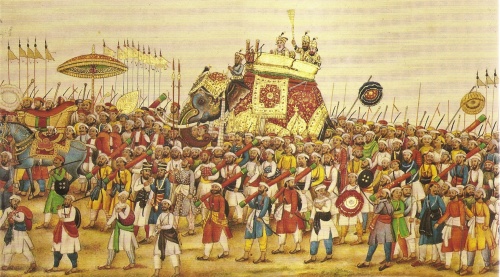 This section from a panorama of the durbar procession of Akbar II, India 1835, displays the ceremonial parasols that featured prominently in Asiatic cultures [Wikimedia Commons]