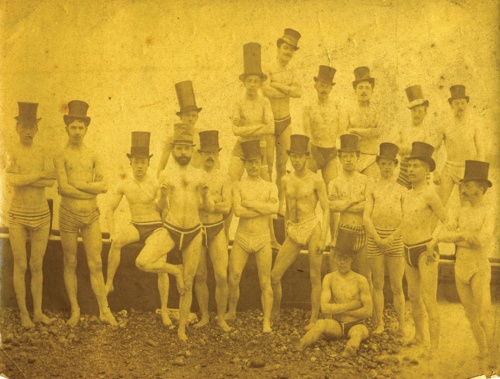 Mucking about in the sea has always been a popular activity in Brighton. Some even say the town is one of the original homes of open water swimming in England; we can certainly boast about having the oldest sea swimming club.

It is also reasonable to claim that the town’s social and economic development is closely tied to seawater. Who can forget Dr Richard Russell and his publication “The Uses of Sea Water” (1753) in which he famously recommended that his patients not only swim in the sea off Brighton, but also drink the salty water? The Victorians edged away from the notion of beachgoing as a strictly medical undertaking and made sea bathing a more pleasurable activity. Not only did they embrace dipping in the sea as a genteel pastime – think of those images of Brighton beach crowded with bathing machines and hordes of people in their neck-to-knee costumes flapping about in the waves - but they also encouraged swimming as a sport that everyone could participate in. This included women as evidenced by swimming teacher, Harriet (Rowell) Elphinstone-Dick who won local fame in 1875 by swimming seven miles in rough water from Shoreham Harbour to the West Pier in a record time of 2 hours 43 minutes.

By the 1930s sea bathing was hugely popular and very fashionable. Gone was the vigorously enforced etiquette which upheld the idea of propriety and decency on public beaches and in its place was something a lot more fun. Magazines of the time referred to health and general fitness through swimming, but they also mentioned the magic word: beauty. Vogue and Life Magazine featured the new swimming costume; launched in 1929 and heralded by designers, Jantzen, as, “the suit that changed bathing into swimming”.

And the place for the fashionably chic to bathe and to be seen to bathe in their new figure hugging and, most importantly, less absorbent swimming costume was not the beach but a lido. In Brighton there was Blackrock Lido which opened in 1936 (closed in 1978). This seawater pool on Madeira Drive was built in a beautiful Art Deco style and catered for the dramatic increase in the number of holiday makers coming to the town in what was known as the Golden Age of the Seaside Holiday.

Then there was Saltdean Lido: “The Seventh Wonder of the English Seaside”, according to English Heritage. Located on Brighton’s eastern border – where the South Downs meets the sea at Saltdean Gap – this unique lido was commissioned by internationalist entrepreneur Charles Neville and designed to elevate Saltdean’s status as a fashionable seaside resort.

Built in 1937-38 to designs by the architect Richard W H Jones, Saltdean Lido was the height of fashion and hailed as the most innovative design of its type in Britain. Its streamline modernist design encapsulated the slender and stylish lines of a contemporary oceangoing liner and gave bathers the impression of being on board a ship ready to set sail.

The progressive spirit of the lido (and the new costumes!) stimulated greater interest in mixed, communal bathing and at Saltdean swimmers were able to enjoy a crescent shaped seawater pool large enough to accommodate 500 bathers, a separate paddling pool for children, a tea terrace, sun decks for followers of the growing cult of “sun worship”, café, fully equipped changing rooms and, for those interested in displays of physical prowess, a three-tier diving board. All, I would add, for an admission fee of just 6d.

Sadly, its time in the sun was short, after just two summer seasons the outbreak of war caused Saltdean Lido to close and the auxiliary fire service moved in, using the pool as a water tank. The male dressing rooms were converted into a temporary church and the female section into a Sunday School. The fire service left in 1945 and since that time there have been lots of ups and downs for the poor lido. In 2014, the Save Saltdean Lido Campaign, set up by local residents, successfully secured funding and a 60-year lease from Brighton and Hove City Council. The lido is now operated by the sports and leisure organisation, Fusion Lifestyle, who have brought it back to life for another generation of swimmers.

The novelty and the glamour may be missing, but interest in seawater swimming is once again in full swing. Since the beginning of the 2020 lockdown, with public pools closed and travel to more exotic beaches prohibited, outdoor swimming in Brighton, and the UK in general, has been rediscovered. Indeed, figures released by the Outdoor Swimming Society suggest that the number of people taking to the sea (lakes, rivers and lochs) is greater than ever before.

Simon Murie, founder of SwimTrek – a local company that provides training in open water swimming and organises guided swims from the beachfront – says that Brighton now has a vibrant swimming scene with many more people discovering that there is “something idyllic about immersing yourself in open water”.

And any time soon, veteran seawater swimmers and those new to the sport will be able to take the plunge in Brighton’s own heated Olympic-sized pool on Madeira Drive. This new development will not only provide an impressive swimming facility it will form part of the restoration of this historically important part of Brighton’s seafront. It might even help in the rejuvenation of the town as a fashionable seaside resort.

It’s interesting how things go around and come around again and again, isn’t it?