Saddlescombe Farm The Story of a South Downs Farm 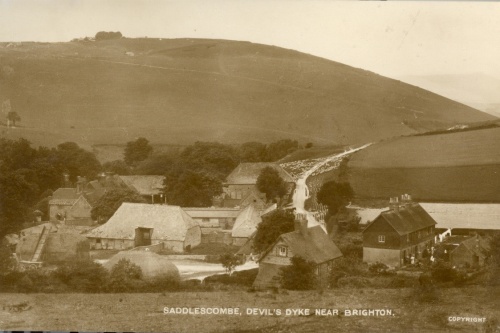 Copyright National Trust. The 1861 census records Saddlescombe as having 34 inhabited houses, 79 males and 83 females. These included Martin and Maria Robinson, six of their children, a governess, three house servants and a groom.

This month I thought that I would travel outside of Brighton for the subject of my article – just five miles to the hamlet of Saddlescombe, where I found a farm that can trace its history back thousands of years.

Today Saddlescombe Farm is situated in the South Downs National Park and, along with the surrounding countryside, is owned by the National Trust. The 450 acres are farmed by tenants who operate a traditional sheep, beef and arable farm. Twice a year the National Trust hold open days and visitors are able to explore farm buildings ranging in date from the early 17th century.
People in the know believe the location would have made a perfect prehistoric settlement for farming. Certainly archaeological finds support this idea, with a variety of artefacts found nearby, including Bronze Age loom weights, Mesolithic arrow heads and Roman pots.

In the Middle Ages the farm changed hands from Saxon to Norman and it is thanks to the Normans that we have the first detailed account of farming life at Saddlescombe. Almost immediately after the Conquest, King William I ordered the compilation of the Domesday Book (1085-6), in which “Selscombe’ was recorded as having land for ten ploughs, 13 acres of meadow, wood for five hogs and an estimated population of 135 people.

The extremely powerful military order, the Knights Templar, acquired Saddlescombe in 1225. For almost 100 years the Soldier Monks managed the sheep and corn farm, their agricultural trade helping to pay for protection of the pilgrim routes. An inventory taken in 1308 gives us a glimpse into their lives: for instance they had a windmill (a very early example of the utilisation of wind power), there was a chapel, they kept only one horse, but 12 oxen for ploughing, 600 sheep, and owned a few, sparse household possessions, but, intriguingly, no bedding was listed.
The Templars were followed by the Knights of St John, but when religious communities were banished, during the Reformation, Saddlescombe was bought by Sir Anthony Brown (owner of Battle Abbey and a castle in Poynings). But it was not until the beginning of mechanisation that real change occurred on the farm. This revolutionary period is brought to life for us by the Robinson family, in particular by Maude Robinson, who wrote about her childhood memories of life on a Victorian farm: A South Down farm in the 1860s.

The Robinsons were Quakers and they travelled to Brighton twice a week to attend the Friends’ Meeting House in Ship Street. Martin, the father, became a yearly tenant of Saddlescombe in 1853. Maude was born in 1859, the youngest of eight children. During her early years, her father successfully managed 900 acres and 900 sheep (Maude tells us that the general rule was one sheep per acre) divided into three flocks.

Growing up in the remote valley of Saddlescombe was never dull for Maude. She took an interest in what she called “wild nature” and the work of the farm. The rhythm of the seasons clearly runs through Maude’s collection of memories. Perhaps the biggest event was “sheep shearing day” when an outside team of shearers came to join the farm workers. One year the Poynings Gang went on strike because Farmer Robinson refused to give them a barrel of beer, which they considered as “traditional” and “their right”. The offer of oatmeal and water flavoured with lemon and extra wages just did not satisfy them – they wanted beer!

Stubbornness was a key characteristic of an old donkey called Smoker who worked the water wheel which drew water for the hamlet from a well that is thought to have been deepened, but not dug, by the Knights Templar in the 13th century. Cantankerous Smoker was eventually replaced by Issachar, then came a Welsh colt they named Commodore Nut (after a dwarf who was touring with the Tom Thumb Theatre at the time). For 32 years Comm was Maude’s friend and companion.

Gradually, Maude’s siblings moved away until, after the death of her parents, only Ernest, who ran the farm, and Maude remained. Maude kept bees, made dolls for charity and wrote stories and articles about country life, many of which were based in historical fact. Ernest died in 1925 and Maude moved to 11 Windlesham Gardens in Brighton. The farm and land was bought by the Corporation of Brighton, possibly because their water supply is drawn beneath it. Maude died in 1950.

About the same time Maude moved from Saddlescombe, Stan Hollingdale was born there (1925 – 2011). He spent his whole life in the same house and worked as a farmer for 60 years. In an interview he gave to the National Trust in 1996, he spoke of his childhood when ten workers were employed to do the threshing and horses did the ploughing, up to the days of the first combine-harvesters and automated milking parlours. Stan also remembered the Second World War when Canadian soldiers took over the farm and bombs dropped in nearby fields.

Like Maude, Stan felt that the war put a stop to the homely simplicity of English country life. It brought about a massive period of change at Saddlescombe: machines replaced people and they no longer kept sheep. But now sheep are back and, with the help of tenants Camilla, Roly and their sheep dog Bell, townies like us can experience working as a shepherd for the day. The rhythm of the farming year is the same as it always was at Saddlescombe, it is just the way things are done that has changed. 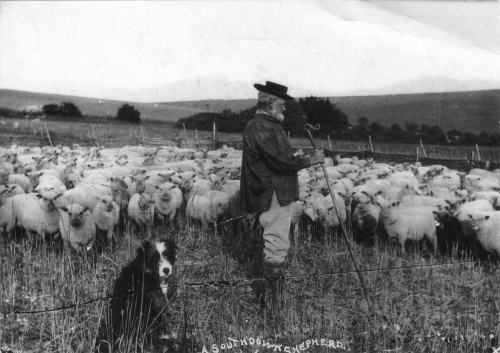 Copyright National Trust. Two of the shepherds on Saddlescombe farm had names that suggest their ancestors must have followed this profession since the very introduction of surnames - Thomas Shepherd and Fred Wooler. 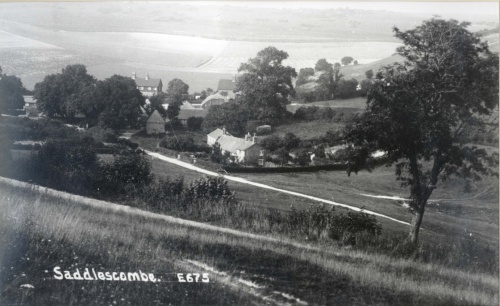 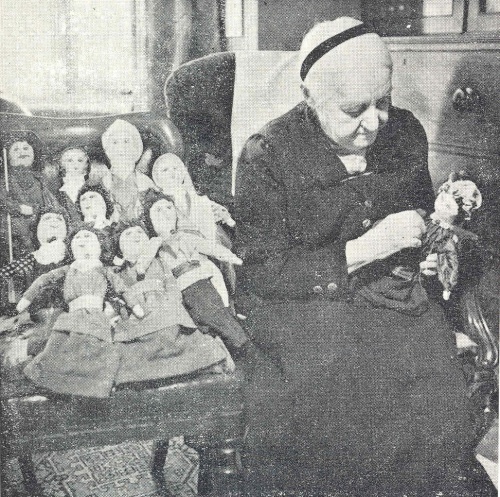 Copyright National Trust. Maude Robinson in her later years. As a young child she had been taught at home by a German governess, later she went to a private boarding school in Lewes.