A Regency Christmas at the Royal Pavilion 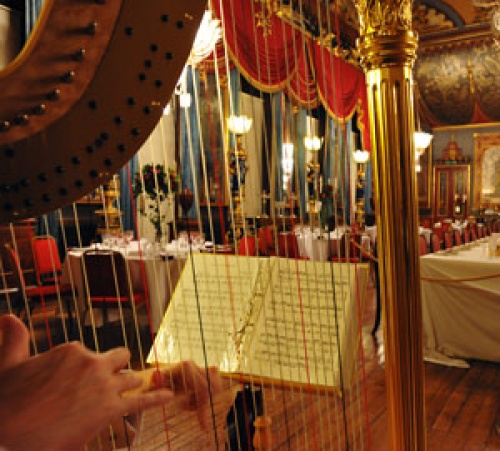 Celebrations at the Royal Pavilion for the Christmas and New Year period of 1822-23 were so extraordinarily lavish and indulgent they cost quite literally the accumulated worth of a skilled man’s entire working life.

Expenditure on fuels for heating, lighting and cooking alone for the four and a half month period of occupancy that winter totalled £3,300. It would take a skilled city worker thirty-three years to earn that sum (over two hundred and fifty years of a poor man’s labour!)

In the winter of 1822 George IV was three years into his reign as King. He’d spent the eleven preceding years as Prince Regent, presiding over the age of elegance and cultural achievement we know as the Regency. By 1822 George was sixty years old and not a healthy man. Amongst other illnesses he was suffering from gout, an agonisingly painful swelling of the joints, but ill-health never stopped George from throwing a party.

He invited family, friends and national and international guests to Brighton to enjoy a season of vast banquets, glamorous balls and outstanding concerts. The music in the celebrated Music Room was provided by the King’s own band, thought to be some of the finest musicians in Europe. A high point for music at the Royal Pavilion was the visit of the Italian composer Giacomo Rossini during Christmas 1823.

The Royal Pavilion was not George’s principal home. Following its completion in 1822 he appears to have lost interest in his oriental seaside palace. From 1822 to his death in 1830 he was in residence only four times. In his later years George lived mostly at Windsor Castle.

Preparing the palace for the King’s Christmas visit was a huge undertaking, and it bought welcome winter work to the locals as additional staff was recruited including lamplighters, kitchen and linen staff, coal porters and extra watchmen. Food had to be sourced and much would have been bought locally, no doubt to the delight of Brighton and Sussex traders. However, the King’s favourite brown bread was specially imported from Hanover in Germany. Christmas food in Regency times was heavily rich and highly calorific (no wonder George weighed in at 24 stones). For less than four weeks provision the Pavilion Christmas food bill included £300 worth of butter, eggs and cheese, £500 was spent on meat, sausages and bacon, £300 on poultry, £180 on fish and oysters and over £700 on groceries, hams and tongue. Milk and cream came fresh from a rented cow. The proximity of the animal made it possible to prepare syllabub, a Christmas favourite dating back to Tudor times, made with cream and sugar lightly curdled with wine.

Quality wines were only consumed by the wealthy. The middle-classes drank port, sherry, Madeira, gin and ale. Punches made from brandy or rum combined with fruit juice, green tea or milk were enormously popular; the brimming punchbowl being perhaps one of the most enduring images of a Regency Christmas party.

George was especially fond of ice-cream, a luxury fashionable at the time but very much the province of the moneyed classes. Ice-cream recipes start to appear in cookery books in the eighteenth century. To make ice-cream you needed soft fruit, sugar, cream and ice. However, in the days before refrigerators how was George’s treat made and kept? As in all grand houses of the time the Royal Pavilion had an Ice House. It was constructed in 1822 in the Pavilion Gardens. Ice Houses were underground brick-lined well-like structures filled with ice locally collected from ponds in the winter months. There was also a dedicated ice room, south of the Great Kitchen. The room was furnished with lead-lined ice storage bins and was adjacent to the confectionary, where ice moulds and utensils were stored for use by chefs.

Impure pond ice was used for keeping wine bottles cool. Purer ice graced the table. You stood your wine glass upside-down in gold wine-coolers which were filed with crushed ice (these can be seen on the table setting today).

Putting ice into drinks was a novelty. George is recorded as drinking at a dinner “at least three bottles of wine, besides punch made with maraschino with lumps of ice in it, a sort of spicy liqueur which he takes in great quantity”.

Clean freshwater ice imported by ship from Norway first appeared in London in May 1822 and caused a sensation. Ice in summer was a sight to be marvelled at and crowds flocked to see it unloaded.

This Christmas season ice has returned to the Royal Pavilion Gardens in the form of an ice-skating rink. George and his fun-loving guests would very much approve 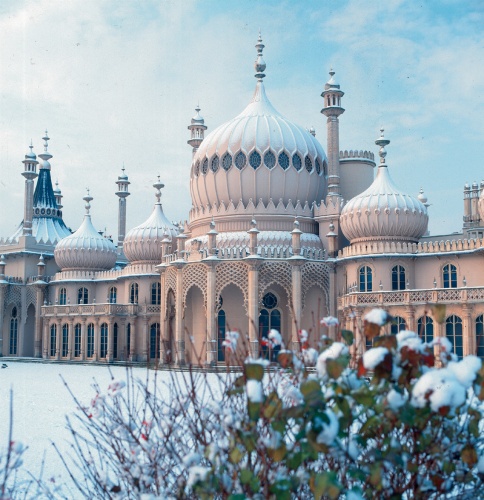