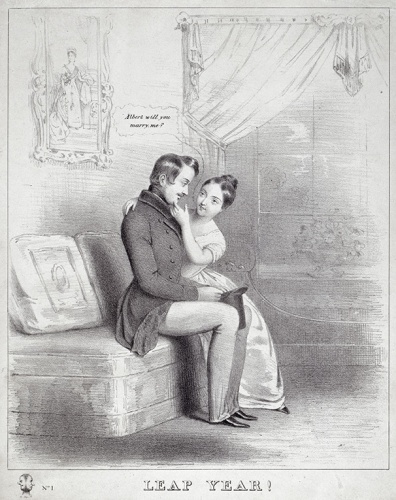 Leap Year is the traditional time for women to propose marriage. It is believed that this tradition started in 5th century Ireland when St. Bridget complained to St. Patrick about women having to wait a long time for men to propose. According to legend, St. Patrick said the yearning females could propose on this one day, the 29th February.

In 19th century Europe rules of courtship were still very strict, but there was one woman for whom these rules did not apply and, indeed, royal etiquette demanded that she make any proposal of marriage, leap year or not. She was, of course, Queen Victoria.

Victoria ascended the throne three years before her marriage to Albert and was the first reigning queen to marry. She first met Prince Albert of Saxe-Coburg and Gotha, her first cousin, in 1836 when she was 16 years old, but it was not until a second meeting in 1839 that she fully appreciated how handsome and charming he was. Victoria proposed to Albert at Windsor Castle in October 1839 (not a leap year) and they were married on the 10th February 1840 (a leap year), in the Chapel Royal of St. James’s Palace, London. She wore a white satin dress, trimmed with orange blossoms and a veil of Honiton lace, a pair of very large diamond earrings and a diamond necklace. Albert was dressed in the uniform of a British field marshal and was decorated with the collar and star of the Order of the Garter. They were attended by twelve bridesmaids, all daughters of peers of the realm; dressed in white with white roses. The Archbishop of Canterbury conducted the service and yes, the Queen of England did promise to obey the younger son of a German Duke, saying later that she pronounced the word “obey” with a deliberate intent to keep her vow. The wedding breakfast was held at Buckingham Palace and soon after seven o’clock in the evening, the royal coach, escorted by Lifeguards, took the couple to Windsor Castle where they made their home together. (Incidentally, now open to the public).

The rest, as they say, is history: a marriage famed for its great love and admiration, its nine children and Albert’s premature death from which Victoria never recovered.