Mother's Day at The Longman Pub

The Passing of St Valentine 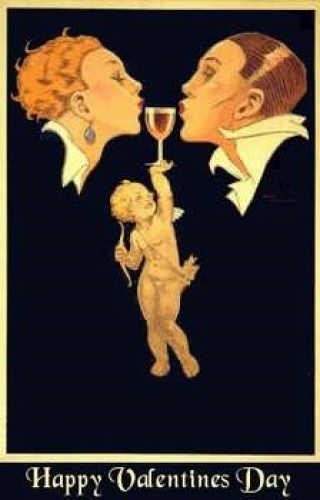 Sad as it might sound, I haven’t given much thought to St Valentine for quite a few years now, but when I was in the History Centre this week I did take the opportunity to try and discover how people have regarded Valentine’s Day in the past.

My starting point was exactly 100 years ago and the Brighton and Hove Society Magazine, dated Thursday 17 February 1910. Here I found an article which bemoaned the loss of a once romantic tradition and reflected on how the present generation had changed and for the worse; how 30 or 40 years ago St Valentine’s anniversary was the much-prized event for all aspiring lovers, but how his birthday in 1910 had passed with scarcely a mention of his name. ‘If the good St Valentine ever hovers in spirit over the earth now, he must find the times sadly changed, and with little need of his intervention in love affairs…’

St Valentine was selected as the sweethearts’ saint because of his name, rather than for any amorous proclivities he possessed; it is a corruption of ‘galantin’, meaning a lover, a gallant. To the parents of the 1910 generation of young things the 14th February was an opportunity for the diffident lover to express his sentiments on a white and silver scented sachet, all hearts and darts, with a little Cupid entrusted to carry some such message as: “Awfully jolly, mind what I say; You’re the prettiest Valentine I’ve seen today”. Curiously enough, while the declaration of passion was paramount for the Victorians, the greatest possible trouble was taken to conceal the identity of the sender. The charm of the old-fashioned Valentine was the mystery that surrounded it. There was an excitement in undoing the string around the gift, intensified by the myriad of wrappings that always enveloped it. Games were played on that day, usually involving a forfeit. If a girl gave a coin as a forfeit, she had to be very careful, for the next person she gave it to could demand any favour he liked of her. Children, or ‘small village urchins’ as described in the article, paraded in the streets singing, “Good morrow, Valentine” in certain expectancy of getting half pennies, hot chestnuts, or other largess thrown at them.

In 1910 the times were described as very different, ‘a prosaic age, when no one is ever backward in coming forward, and if a young blood finally condescends to lay his heart, and his Gladstone bag, at a lady’s feet, it is mostly a foregone conclusion that he will be accepted.’ That is, if his gift took more practical shape than a scented sachet with a doggerel message attached. Young ladies of the day evidently were looking for something slightly less hand-made, a diamond tiara or a motorcar perhaps. Step forward to February 1965 and Brighton’s head postmaster, Tom Hall, told the Argus that because the 14th February fell on a Sunday, the GPO would not be running their usual St Valentine’s Day telegram service. In previous years 7s 6d had bought a discreet few words of love and affection on a specially designed form, but in 1965 none were to be sent, ‘It would mean opening the entire post office’, said Mr Hall and he couldn’t expect his Sunday staff to handle the additional workload without, one presumes, serious repercussions from their Trade Union! Valentine’s cards had also changed with many, according to the postmaster, going by parcel post, ‘The size of some of them is absolutely amazing…the girls come in their lunch breaks to get them weighed’.

This was already a high-pressure business with 15 million cards, at an average cost of 1s 6d, expected to be sold throughout the country in 1965. And these cards were different, long gone were the lace-edged affairs, tenderly expressing old-fashioned sentiments, now as much derision as love was connected with St Valentine’s Day. On a walk around Brighton’s card shops the newspaper reporter encountered the following delightful messages: ‘We might as well be Valentines this February – it’s too cold for anything else’, the rather bizarre ‘Be my Valentine – or I’ll kick you in the ear’, ‘Valentine, you have the face of a saint-Bernard’, and my personal favourite, ‘It took only three things to convince me I wanted you for a Valentine – Gin, Vermouth, and an empty glass’.

In 2010, St Valentine’s Days will be, once again, an exercise in commercialism, played out in card shops and florists for the lucky, garage forecourts for the not so lucky. But, just as there were in Victorian times, there are still going to be young girls waiting anxiously to see what is going to be delivered to their door. 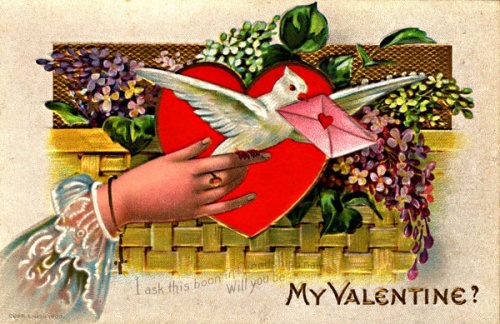