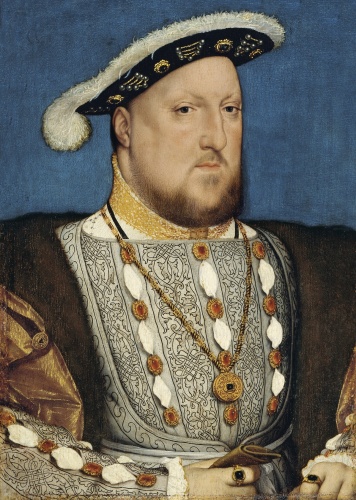 A History of Men’s Headwear

Prompted by the windy weather, we decided this month to look briefly at male hats over the past 500 years. Head coverings were first used for warmth and protection, but soon assumed an additional ornamental and symbolic meaning as the wearing of headgear became a mark of identity, authority and respectability. Hats can be mainly functional (for example, helmets) but are usually considered dress items that complement or complete an outfit and so their style generally links to the prevailing fashion and trends in hairdressing. Hats can be tilted at different angles, adding an air of panache, like John Steed from The Avengers; certain hats have been popularly associated with famous individuals, like the homburg favoured by King Edward VII, Sherlock Holmes’s iconic deerstalker and Maurice Chevalier’s straw boater.

In the early-16th century a four-cornered biretta cap was fashionable; after this style grew outmoded, it was relegated to professional and academic use, a formalised version of the cap becoming the stiff mortar board or academic cap still worn by scholars and graduates today. Meanwhile flat woollen caps were the mark of a Tudor citizen, tradesman or apprentice, while upper-class males favoured low-crowned ‘bonnets’ of rich velvet, damask or satin, the brims slashed and attached with ornamental buttons, badges or jewels. By the mid-1500s flat tilted caps were in vogue, and subsequently crowns grew larger, gaining a squashy appearance. Hats with deep round crowns, like a bowler, were admired in the 1580s; however the chief late-16th and early-17th century mode was the tall felt hat with a conical ‘sugar-loaf’ crown.

During the early-1600s tall hats usually had a wide brim and decorative buckled hatband. Steeple-crowned hats are often associated with the Puritans, but they did not wear special hats, simply avoiding extravagance in dress. Gradually hat crowns lowered and brims widened, tall conical styles growing outmoded by the later 17th century. Wide soft brims were often cocked (turned up) and attached to the crown at the front or side: this was largely a practical measure for it prevented the hat from being blown away when riding, and from getting in the way of a sword. Plumes were fashionable and luxury feather-trimmed beaver hats are popularly linked to the Royalists or Cavaliers in the English Civil War (1642-51).

Traditionally hats were worn for warmth as much as for fashion and so were kept on indoors, even at meal times; however in the 1660s men began to wear long, thick periwigs and when the diarist Samuel Pepys flung off his hat at dinner in 1664, this reflected changing customs. From then on, men’s wigs and hairdressing became more important than their headgear. During the 18th century the tricorne was most popular – a low, round, stiff-crowned hat with all three sides of the brim evenly cocked. Social etiquette also evolved at this time and in Georgian England the hat was not in fact always worn, but often carried elegantly under the arm. Black beaver was the usual material and for very formal dress the button fastening on the cocked brim might be jewelled, the brim often edged with gold or silver braid or lace. Various styles of tricorne evolved, including the Nivernois, fashionable 1760s to 1790s.

A round hat with a wide un-cocked brim was an alternative 18th century style, widely worn in rural areas and also being adopted by professionals. By the 1770s this unpretentious hat was becoming more fashionable, replacing the traditional tricorne for riding. Crowns also grew taller and straighter, with a smaller brim, and by the 1790s this vertical hat gained greater favour. Worn by gentlemen for smart town wear, it formed the prototype of the top hat that would become so characteristic of the 1800s.

In the early-19th century the top hat was regular day wear, either having a fairly tall, flat-topped crown and moderate brim turned down at front and back, or a lower-crowned version with wider brim curved up at the sides. Over the decades variations occurred in the shape and size of the top hat: for instance, crowns could be vertical, tapering or curved, while brims might be narrow or wide and curling gently or firmly at the sides. In the 1830s-1850s the tall ‘stove-pipe’ top hat of at least 8 inches high was fashionable, lowering in the 1860s/1870s, then rising again in the 1880s/1890; simultaneously the material of the top hat changed from traditional beaver to silk or ‘hatter’s plush’.

The formal top hat remained correct wear with the conservative frock coat throughout the Victorian and Edwardian eras, but from the mid-1800s onwards several new hats also developed for use on different occasions. By the 1850s a low-crowned, wide-brimmed ‘wide-awake’ hat was being worn on weekends at home, at the seaside and in the country. Another casual style was a straight-brimmed straw hat, similar to sailors’ headwear, and this later developed into the boater. The stiff, lightweight straw boater hat, first worn for recreational pursuits like tennis and rowing, became acceptable for relaxed street wear in the 1880s, reaching the height of its popularity in summer during the 1890s and early-1900s.

Another important Victorian hat style was the bowler, characterised by a stiff bowl-shaped crown. Introduced in the 1860s as semi-formal headwear, this was popular for ‘Sunday best’ and for business wear: it also indicated status, the proprietor, manager or foreman of a workplace typically being distinguished by his smart bowler hat, while workers wore more casual soft caps. The bowler remained commonplace until the 1920s, eventually being retained only for city business wear. Meanwhile the round cloth cap – also originally a sporting style - was widely taken up during the 1890s, becoming the badge of the early-20th century working man and remaining popular until well after the Second World War.

By the turn of the century more stylish felt hats with a dented crown were growing fashionable, notably the stiff homburg with a silk-bound brim, popularised by the Prince of Wales/King Edward VII, and the softer trilby worn with or without a band. The name ‘trilby’ originated with the publication of George du Maurier’s novel in 1894 and the new trilby hats grew increasingly popular during the early-mid 20th century. The straw Panama hat also had a dented crown and moderate brim, and this relaxed summer style superseded the traditional straw boater, remaining a favourite today. Since the 1960s, with the decline in formality in dress, few men have worn hats as regular daywear.