The Forever Changing Face of The North Laine 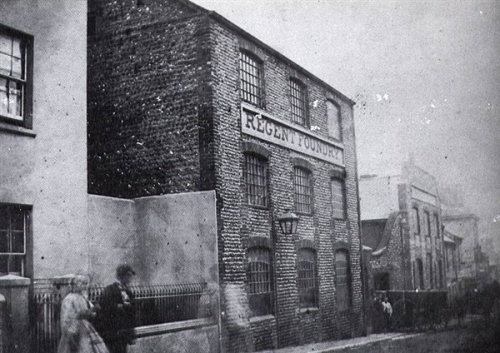 The Regent Iron Foundry on the corner of North Road and in Foundry Street c1890. It was the town’s largest employer for much of the 19th century. The building was demolished in 1921 and the Post Office was built on the site in the 1930s. Image courtesy of www.mybrightonandhove.

I used to live in the North Laine, we moved there in January 1985 and I can’t tell you how exciting it was. We could open the door of our Robert Street house and (if we avoided getting run over by Argus lorries) find everything we needed just steps away: there was a fish monger, a butcher, a baker and a green grocer just in Sydney Street alone; in Gardner Street, a small Tescos, a purveyor of eggs and a shop that sold shoes for vegetarians. Then there was delicious bread from Infinity Foods, a selection of great pubs, and, for a truly new shopping experience, a visit to Anita Roddick’s Body Shop in Kensington Gardens. As young people-about-town we really didn’t want for more!

But this 1980s version of North Laine was just one of many different stages in the life of the area. In the 1760s, North Laine was one of five large fields, still farmed on the medieval rotation system, surrounding Brighton. In fact, “Laine” is a Sussex dialect term for an open tract of land at the base of the Downs. At the turn of the 19th century, building work for the expanding town had started to encroach upon the farmland and fields gave way to market gardens, stables, paddocks and small workshops.

Gradually, market gardens became industrial units and, street by street, North Laine developed to become the town’s main area for processing food and drink. Its position next to the main highway south into Brighton made it a suitable place to bring in animals for slaughter and processing and for storage of grain to feed the growing population.

The opening of the Brighton Railway line in 1840 completed the transformation from agricultural land to the town’s new industrial and commercial centre. The railway created demand for housing and many of the streets in the area date from the period 1840 to 1850. The terraced houses they built provided accommodation for the workmen and their families that flooded into the town all looking for a better life.

But, through the first quarter of Queen Victoria’s reign, the North Laine was known mostly for its squalor, abysmal living conditions and high concentration of slaughterhouses. Vine Street might well have been the most “unwholesome” place of all, the street being virtually given over to slaughtermen and their associated trades. A candle factory, using the fat from the slaughterhouses, opened on the corner of Spring Gardens and North Road and there was a large bacon curer’s yard off Jubilee Street. Added to this, it was common for ordinary householders to keep chickens and pigs in their back yards.

One thousand people lived between Gardner Street and Thomas Street (now Tichborne Street), with no running water or sewage and water came from wells that were often contaminated by the nearby cesspools. Worse, was Orange Row, north of Church Street, and at its northern end, two alleys together known as Pimlico which were considered Brighton’s worst slums.

In 1849, engineer Edward Cresy was sent by the Board of Health to assess Brighton’s housing and sewage facilities. Unsurprisingly, Pimlico, Orange Row, Spring Gardens and Thomas Street featured prominently in his report. He said that these were:

areas where diseases prevailed, often the result of sulphurated hydrogen which arises from the excrement retained in cesspools. It pervades all the breathing places found at the back of buildings. Many of the houses are wretchedly damp, constructed with inferior bricks and mortar made of sand. The walls are covered with lichen, and with the decomposition of vegetable matter, the inmates seek the imagined restorative powers of the public house.

And there were many such establishments offering a warm, dry refuge away from the hardships of everyday life. The Eagle, for example, has welcomed in all those looking for a restorative pint since 1864. The Wagon and Horses, which was built in 1848 by Frederick Mahomed as a gymnasium, became a public house in 1852 and across the road there was the Mash Tun which was originally known as the Volunteer, after the infantrymen stationed in the nearby barracks.

Idle soldiers (waiting for Napoleon to invade, or not ) would have frequented the narrow alleys around Church Street, rubbing shoulders with the town’s drunks, beggars, thieves and prostitutes. Quite a large number of prostitutes it would seem - in 1860 somebody counted 97 brothels and 300 prostitutes. Thomas Street, alone, had four houses known to be for ‘women of the worst character’.

Action to clean up the area started to take effect in the 1870s, with the first slum clearance which included old tenement houses and most of Orange Row and Pimlico. They were replaced by more modern streets and the North Laine moved into another phase of development. After WWII, there was a decline in the manufacturing base of the area and, as a consequence, it became generally run down; ripe, many thought, for extensive redevelopment.

But then Ken Fines, the Borough Planning Officer, stepped in. He felt the area had charm and saw its potential. Today Fines is credited with having saved the North Laine area from falling victim to plans that were afoot to replace existing buildings with new high-rise developments, a flyover and a large car park. After considerable opposition by council members and businesses, the council eventually came round to his view, and the North Laine Conservation Area was designated in 1977.

As a result of the faith Ken Fines had in the area, the North Laine has been able to regenerate itself once again. It is now a highly sought after residential area and boasts some of the finest, most exciting independent shops, cafes and restaurants in the whole of Brighton.
If you are interested in finding out more about North Laine the first-ever detailed history of this vibrant and forever changing part of Brighton has been published. The North Laine Book is available from Waterstones, Brighton Books and Sandpiper Books both in Kensington Gardens, Amnesty Books in Sydney Street and Raining Books in Trafalgar Street, City Books 23 Western Road Hove or direct from the publisher Brighton Town Press, 10 Clermont Road, Brighton BN1 6SG @ £12.99 plus £2.00 p&p for one book and £3.00 for 2 or more books. 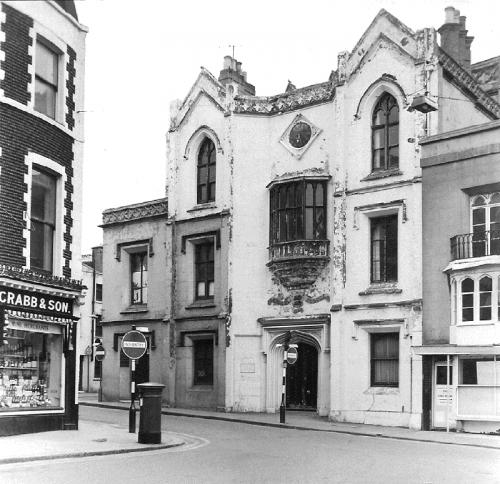 The corner of Jubilee Street (now Carluccio's) was occupied by the Central National School from 1871 until 1969. It was one of the town’s earliest schools, designed in a Regency Gothic style, it had two shops on the ground floor with the master’s residence. It closed in 1967 and was demolished in 1971 before a protection order, that was in the post, arrived. Image courtesy of Brighton Town Press. 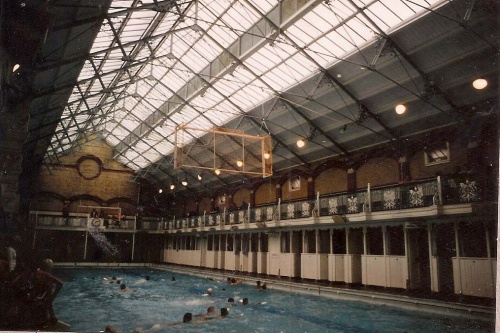 North Road Swimming Baths were built in 1895 and initially were open to men and women on separate days. This photograph was taken just before it closed in November 1979. The Prince Regent swimming pool was built on the site. Image courtesy of Brighton Town Press