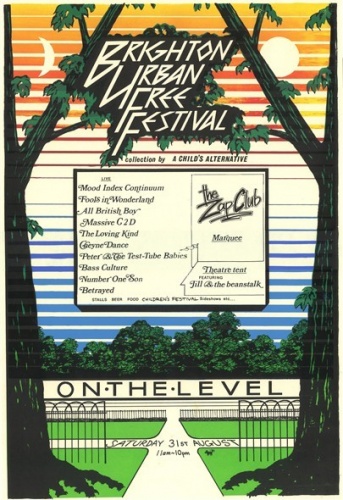 An event that gets more ambitious by the year...’ Sunday Times.

Whilst now two distinct entities, together, Brighton Festival and Brighton Fringe Festival create the largest arts festival in England; putting Brighton right on the international cultural calendar. This is a spectacular achievement and one that deserves to be made a song and dance about and, in 2016, in its 50th anniversary year, the organisers of Brighton Festival intend to do just that. Plans are already being hatched to roll out the red carpet for some really special events. But, ahead of their celebrations, I thought it would be an idea to look back to see how it all came about.

Brighton Festival, as we understand it now, was perhaps one of the most important developments of 1960’s Brighton. Some suggest that it had its origins in a festival staged by six-formers at Brighton College and/or fundraising activities organised by students during their annual Arts-Rag Week. Others believe that the idea was first proposed in 1962 by Lewis Cohen (politician, property developer and Mayor of Brighton 1956-57). Certainly the festival’s first launch party was held in his old home in Dyke Road Avenue. What we know for certain is that, in 1964, Ian Hunter, the eventual Artistic Director, submitted a programme of ideas for a festival in Brighton and in 1965 the Board of the Brighton Festival Society was established.

The first festival ran from 14th to 30th April 1967 and had an ‘all-seeing eye’ as its logo. On the opening night there was an international wine festival, a visit from the Warsaw Philharmonic Orchestra and a gay arts ball at the Metropole Hotel. Theatrically, the hottest ticket was for ‘The Dance of Death’ at the Theatre Royal, starring Sir Laurence Olivier. Pink Floyd played most nights of the festival at the Kinetic Area Discotheque on the West Pier, admission 5/-. And, for those not so keen on Pink Floyd in a disco, there were other ‘pop’ acts, including The Who, Cream and Georgie Fame and the Blue Flames. For jazz lovers, the main attraction was Cleo Lane and John Dankworth.

‘Quirky’ best describes some of the other events on the programme: the ambitious (and doomed) plan by artist William Mitchell to paint a huge Union Jack on the surface of the sea; concrete poetry installations; a raft moored between the piers which had three pylons on it bearing the words ‘LOVE’, ‘PASSION’ and ‘BEAUTY’ in large (gradually wilting) letters; and, on the beach, a ‘Bonfire of the Vanities’ fuelled by whatever people considered ugly! Despite, or perhaps because of, the quirkiness, the festival was overall judged a success and an annual event was born.

May 1968 saw the second Brighton Festival take place. ‘100 events in sixteen days’ were promised, the overall aim being: “…to stimulate townsfolk and visitors into taking a new look at the arts and to give them the opportunity to assess developments in the field of culture where the serious and the apparently flippant ride side by side.” (Ian Hunter) Science fiction was the major theme – discussed at a weekend conference and reflected in poetry readings, music and film. The big opening concert was ‘Belshazzar’s Feast’ performed by the Royal Philharmonic Orchestra and conducted by Sir William Walton. Fringe events – not discouraged by the previous year’s waterborne disappointments - included 150 foot high ‘Seatotems’, inflatable tubes anchored to float in a cluster between the piers. And, for the children, an aqua-pneumatic trampoline, built over the paddling pool near the West Pier, and filled with coloured liquid. The programme of pop concerts, jazz and what was then called ‘light music’ included Sandie Shaw singing that year’s Eurovision winning song – ‘Puppet On A String’.

The third festival in May 1969 had a budget of £4,000 and a roaring twenties, jazz age theme. Alongside this, they featured Czechoslovakian art, screening Czech films, the Black Stage Revue (puppet acts performed under ultraviolet light) and performances by the Czech Philharmonic Society. Elsewhere, top billing was given to classical pianist Arthur Rubinstein, Yehudi Menuhin and Jacqueline du Pre.

Brighton Festival was taken to new, greater heights in 1984, when Gavin Henderson became the Artistic Director and secured more funding and sponsorship. He also introduced the ‘open house’ art exhibitions, now a popular festival in its own right. More innovation came in 2008, with the appointment of Andrew Comben. He brought in the idea of a Guest Director to Brighton Festival – an inspiring and internationally significant individual to bring cohesion and themes to each year’s programme of events.

Heather James, Chair of Brighton Fringe, sees this split as the moment they really came into their own. They established a limited company and registered charity in October 2006. In 2012 they rebranded themselves as ‘Brighton Fringe’.

“It’s always been fun, it’ll always be stressful and it’s a huge credit to all the staff, volunteers and Fringe participants that we’ve grown so significantly in less than a decade...” (Heather James)

Finding a festival highlight we could all agree on would be impossible, but Colin Matthews, whose involvement with both the Festival and Fringe goes back to the mid-seventies, suggests the ‘Light Players’ by Group F - a spectacle that took place in Preston Park in 2006 when, in front of an audience of 50,000, the park became a sea of fire, “truly amazing and never surpassed”.

So, time to stop pouring over the brochures and get out there and enjoy yourself. You never know, you too might experience something amazing.