Entertainment for the Masses 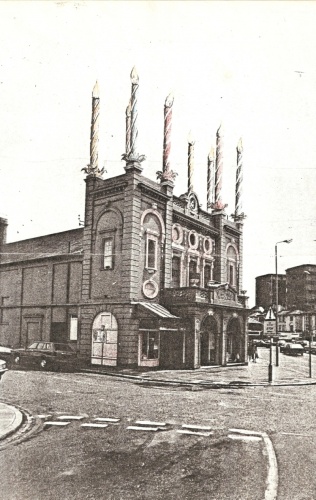 On the 22nd September the Duke of York’s cinema celebrates its 100th anniversary. This is a real achievement, especially when so many of its contemporaries, with wonderful names like the Bijou Electric http://thepostmagazine.co.uk/backend/rainlab/blog/categoriesEmpire (now Burger King), have long since closed their doors. The history of cinema in Brighton goes back further than 1910 though and encompasses not only the rise and fall of glitzy picture palaces and back street ‘flea pits’, but the very birth of the film industry.

In the late 19th century a Brighton group, including William Friese-Greene*, George Albert Smith and Esmé Collings, took the fledgling industry to new heights, rivalling Hollywood in terms of expertise and output and inventing techniques still used in film-making today. These pioneers organised film shows in Hove Town Hall as early as 1895 and on 1 July 1896 Robert Paul gave the first demonstration of the ‘Animatographe’ in Victoria Hall, King’s Road. Over the next decade films were shown between variety acts at the Hippodrome Theatre, the Brighton Aquarium and theatres on the Palace and West Piers.

The first permanent cinema in Brighton was the Electric Bioscope, which opened in January 1907 in a converted shop in Western Road (now Waitrose). The screen consisted of a stretched canvas painted white and the projector was hand-cranked. Over the next few years it was extended and renamed, becoming at one time the Queen Electric Theatre; noted for the constant temperature it could achieve thanks to “real ice breezes from the flower-decked ice grotto”. Another idiosyncratic feature of this much loved cinema was the attendant who sprayed the air with a perfumed antiseptic from a large syringe during performances to counter fears that cinemas were breeding grounds for various diseases.

From this time on, there was a steady growth in the number of cinemas and by 1911 seven were operating in the town. The Duke of York’s and the Academy, West Street were purpose-built, the remainder were adaptations made from a converted shop, bazaar, newspaper printing works and a roller skating rink.

The large number of early cinemas reflects the enthusiasm for drinking, dancing, fashion and film-going seen after WWI. As public demand increased more cinemas were opened, but with this came an increasing number of complaints, especially from local clergy. Their objections concerned the morality of cinema-going in general and the showing of films on Sundays in particular. The leader of the anti-Sunday lobby was Mr D Llewellyn, minister of Florence Road Baptist Church, who preached against the serious menace of Sunday films to public morals, discerning a strong tendency in English life towards a “Continental Sunday” (Brighton Gazette, 29 March 1911). He was supported by Councillor Griffiths who described local cinema as “dark places in which young people were invited to congregate with the riff-raff of the town” (Brighton Gazette, 27 December 1911). Their views prevailed and Brighton Borough Council banned Sunday opening of cinemas in December 1911, leading to one, perhaps less righteous, observer commenting that such closure was excellent news for public houses!

This restriction does not seem to have lessened the cinema’s popularity with either local people or tourists. Indeed, a growing percentage of cinema audiences were day-trippers. A fact demonstrated by the building of five cinemas in a line running from the railway station to the seafront, the route taken by millions of visitors. The most important of these cinemas was The Regent, which opened in July 1921 on the junction of Queens Road and North Street. This was Brighton’s first super-cinema, accommodating audiences of 3,000, its own orchestra, restaurant, café and a rooftop dance hall. It was also the first Brighton cinema to install a sound system and a Mighty Wurlitzer theatre organ.

The 1930s witnessed the peak of cinema development in Brighton, with six new cinemas opening, including the oriental themed Savoy, East Street and the art deco designed Astoria, Gloucester Place with its famous organ that rose up through a stage trap door at the start of each performance. Seats in these luxurious surroundings were cheap and offered affordable entertainment for everyone. They also offered a form of escapism, a refuge from the reality of people’s lives, where audiences could immerse themselves in the glamorous world of film stars and dashing adventurers. They provided a safe space where women and families could meet and personal space, away from over-crowded living accommodation, for ‘courting’ couples. They played a central role in the social life of Brighton.

By 1940 there were 24 cinemas in Brighton and Hove, providing seats for an astonishing 23,000 people, but, as we all know, this upward trend did not continue. A steady decline began in the number of film-goers in the 1950s resulting in a very mixed fate for Brighton’s cinemas. However, a new era in cinema-going and film-making in Brighton might well be just around the corner. *William Friese-Greene’s story is recreated in the film The Magic Box. For a much more in-depth homage to cinema going in the city see Back Row Brighton, Queenspark Books.