In 1897 beacons were lit nationally to celebrate Queen Victoria’s Diamond Jubilee. (She reigned for a total of 63 years.) In 1977 and 2002 beacons were lit to celebrate The Queen’s Silver and Golden Jubilees. On Monday 4th June 2012, the aim is to light over 2,012 - perhaps as many as 4,000 – beacons, from Tonga to the Falkland Islands and Malta to Kenya. And the network of beacons that will criss-cross the UK, placed on historic landmarks, hill-top vantage points and famous mountains, will include Ditchling Beacon.

Ditchling Beacon is an Early Iron Age contour hillfort positioned on the Downs just south of the village of Ditchling with commanding views of the Weald to the north. It is one of the 139 original anchor-chain beacons situated around the country and has been used many times for occasions of unity and celebration, but also as a communication tool to warn of impending invasion and coastal attack.

The most notable occasions were in the 16th century when raiders from France regularly struck the Sussex coast and Brighton. These attacks reached their height in June 1514 when the French, led by Admiral Prégnant (nick-named Prior John), set fire to virtually all the buildings in Brighton’s old town, with the exception of St Nicholas’ Church. They were eventually driven off by archers from across the county who were alerted by a warning beacon on the Downs. There were further raids on Brighton in 1545, but as before, the French were repelled by the large numbers who gathered on the cliff, attracted by the beacon. In 1587, Ditchling was part of the same chain of beacons, designed to provide warning of the long anticipated attack by the Spanish.

On the 4th June, Ditchling Parish Council, with the assistance of the Institute of Chartered Surveyors, will light their beacon at approximately 10 p.m. and at 10.30 p.m. Her Majesty The Queen will throw the diamond switch to light the final beacon in the chain from the stage of her Diamond Jubilee Concert, outside Buckingham Palace. 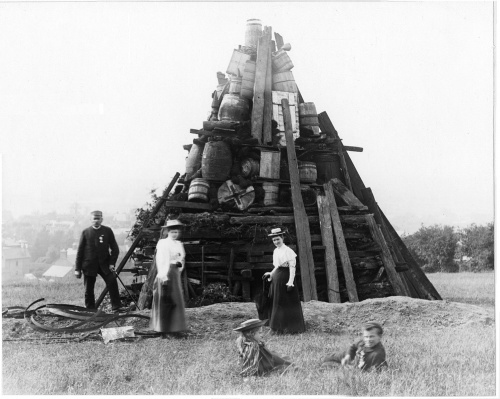