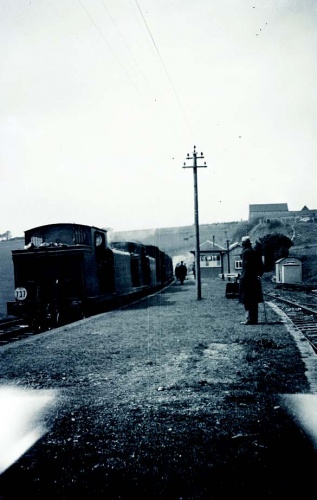 The Beachdown Festival on Devil’s Dyke is happening again this August Bank Holiday weekend and it looks like it will be quite an event, offering an eclectic line-up of music, film and comedy. Not only do the promoters promise 42 hours of entertainment, they also guarantee the driest underfoot-festival site anywhere in the UK - due to the chalk base of the South Downs any rain that falls will simply seep away.

The prospect of a festival without a mud bath is quite appealing and so, of course, is the Devil’s Dyke. Designated an Area of Outstanding Natural Beauty its past is shrouded in mystery. During William the Conqueror’s time it was known as Reach Dyke and in the Middle Ages the site lay within the jurisdiction of the Bury Saint Edmund’s abbots and became known as Saint Edmund’s Dyke. Devil’s Dyke acquired its present name some time after this, perhaps because local people thought it could not have been constructed by human hand and must, therefore, be supernatural.

This no doubt accounts for the collection of myths and legends that have grown up around the Dyke. At the north entrance, for example, there are two ancient earthworks known as the Devil’s Grave and the Devil’s Wife’s Grave. It is said that if you hold your breath and run around the Devil’s Grave seven times he will appear. The best-known legends are, however, those associated with the deep valley, which runs to the west of Saddlescombe and five miles northwest of Brighton in the parish of Poynings. One has it that the Devil was an unwelcome guest at a wedding and was chased away by the guests. When he ran away his fiery tail created the groove in the Downs. Another says the Devil was so angry about all the churches being built in the Weald that he decided to dig a channel through the Downs so that the sea would flood the land and drown all the people. So one night he began digging, but his work did not go unnoticed. Whilst he was busy excavating the 300-foot-deep valley and creating sites such as Chanctonbury Ring and Mount Caburn from the spoil, an old woman saw him. She lit a candle in her window and held it behind a sieve to create a circle of light. Then she pushed her cockerel off its perch to make it squawk. The Devil saw what looked like the sun coming up and heard the cockcrow and ran away because he thought it was sunrise. And the Weald was saved. Scientists, on the other hand, believe the Dyke is a natural geological feature, formed by melt water at the end of the last Ice Age.

Holding festivals on the Dyke may be a fairly new idea, but it has been a popular leisure site among Brightonians and visitors for many years. Perhaps best demonstrated by the fact that a café of one sort or another has been dispensing cups of tea here since 1818. From 1st September 1887 visitors could take a steam locomotive from Brighton to Devil’s Dyke very own railway station and, indeed, as many as 50,000 people used to go up to the Dyke by train on bank holiday weekends. Interestingly, the location of the Beachdown Festival – Devil’s Dyke Farm - was the site of the Dyke railway station and festival-goers will see that part of the platform is still there. The train sadly lost its appeal when a bus service was provided right to the top of the hill and the hotel. The station closed on 31st December 1938.

The first of a series of hotel buildings opened in 1831 and in the late nineteenth century Mr Hubbard, the hotel landlord, introduced some spectacular attractions to the Dyke. These included a steep-grade railway, which ran down the northern slope of the hill to a point west of Poynings village, and from July 1897 until 1908 its two small cars carried some 275,000 passengers a year. Just as popular was a cable railway which ran across the Dyke itself, suspended from two pylons 650 feet apart, providing what must have been an exhilarating trip 230 feet above the bottom of the defile. These attractions, together with the observatory, bandstand, coffee rooms and funfair with roller coaster were so successful with Victorian day-trippers that they took trade away from the hotel and Mr Hubbard was eventually forced to close them.

In 1928 Brighton Corporation purchased 190 acres of downland in the area and dedicated it for public use. A commemorative seat unveiled by the Duke and Duchess of York is inscribed, ‘God gave all men all earth to love’. If you are planning to go to the festival I hope that you love it and the Devil’s Dyke. If you need to get away from the crowds for a while (and I wonder if they will reach late Victorian bank holiday figures) you could take a look at the adjacent hill, which has no particular name of its own, but is crowned by an Iron Age hill fort; or search out what remains of the steep-grade and cable railways. Evidence of the past is still there for those keen enough to find it. 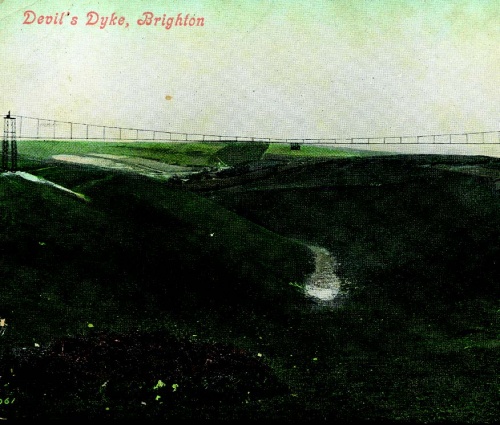 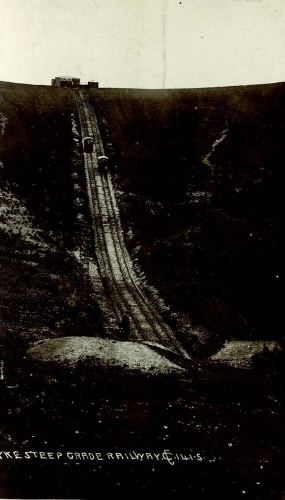