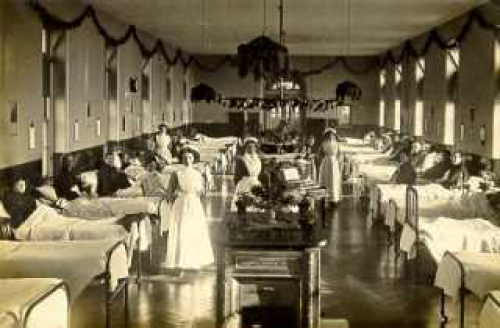 Poor relief in Brighton began in the early 1600s with the building of almshouses in Bartholemew’s Square, Market Street, where the Town Hall is today. By 1723, they were too small and a new workhouse was erected on the site. Its inmates included the town’s sick, aged, and impoverished children who, in addition to cooking and making their own clothes, collected and crushed oyster shells for use as fertiliser. Later, when the poorhouse Commissioners became responsible for maintaining highways, workhouse inmates were used as town scavengers removing animal dung and rubbish from the streets.

Market Street remained in use until 1822 when a new workhouse was constructed on the east side of Church Hill, above St Nicholas’s churchyard and more or less opposite Vine Place and Powis Grove. This establishment was set in nine acres of land and when it was built was on the northern edge of the town, at the start of the downland. There was accommodation within its ‘H’ shaped layout for 600 inmates, housed according to age, gender and ability to work. Outside there was a corn mill for the inmates to make their own flour, a whiting shop for grinding chalk for use as white-wash and workshops for dressing flax and carding wool, plus the manufacture of ropes, cords, doormats and sacking.

The arrival of the railway and the rapid growth of the town meant that, by mid-1800s, the workhouse was once again too small and an alternative needed to be found. However, this was not the blow one might imagine for the Guardians, they realised the potential value of the site, described as ‘affording magnificent views of the sea’ and its appeal to property developers eager to construct ‘prestige housing’. The sale of the land raised £42,000, allowing for the purchase of seven acres on Race Hill at the top of Elm Grove and the erection of an extremely imposing building, designed in the Italianate style by local architect, George Maynard, with a £1,000 left over.

The foundation stone for the Race Hill workhouse was laid on 11th April 1865, but work on completing the project was very slow. The main obstacle seems to have been the cost of pumping water up the hill from the local waterworks. Eventually the Guardians decided to construct their own well using labour from the workhouse. What they achieved was miraculous, the deepest hand dug well in the world, 1,285 feet deep; what it cost the paupers undertaking the backbreaking work can’t be imagined - we do know that one winchman was killed. When the workhouse was opened on 12th September 1867, there was accommodation for 861 people. To discourage too many people applying for relief the Guardians maintained a harsh regime. Those that did enter were made to wear the workhouse uniform, men were set to work breaking stones, while the women picked oakum. There is some suggestion that children from the workhouse were sent as apprentices to a cotton mill in Lancashire. On the lighter side, inmates were allowed one day out during the summer and one at Christmas to visit a pantomime. They were also allowed a pint of beer in the morning, but this led to accusations from locals that the site had become ‘a great free drinking house’. Along the same lines, I suppose, as those people who believe economic migrants arriving at Dover are automatically given money and possibly a free TV!

In 1914, the workhouse was known as Brighton Poor Law Institution. During the First World War, it operated as the Kitchener Indian Hospital accommodating wounded Indian soldiers. It reverted to a workhouse in 1921 until 1930 when it became Brighton Municipal Hospital. In 1948, it became part of the NHS and was renamed Brighton General Hospital. 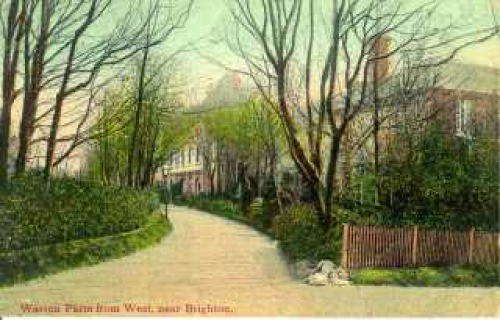 The Warren Farm schools were built as POSTCARD by (unknown) 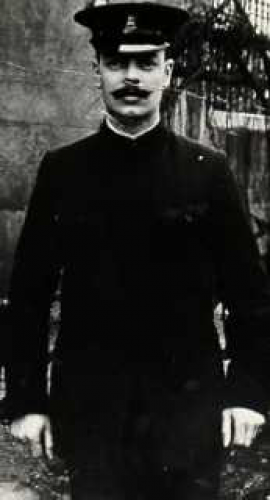 Workhouse officer in uniform in the grounds of Elm Grove workhouse. PHOTOGRAPH by (unknown