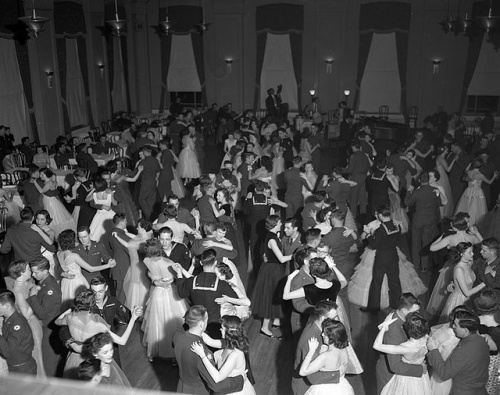 As a major form of entertainment ‘Strictly Come Dancing’ (Strictly or SCD to its devotees) and ‘Dancing on Ice’ cannot hold a glitter ball to the dancing craze that hit Brighton in the 1920s and 1930s.

Before the First World War dance music had started to become popular, spread by the sale of sheet music and gramophone records, mainly from America. Then, in the years immediately after the Armistice, the so-called ‘dance craze’ really took off and a number of dancehalls were established in the town to cater for this new demand for dance bands, American-style ‘jazz’, the Charleston and the first in a series of 20th century Latin music dance crazes, the Tango. The Regent Dance Hall, in Queens Road and Sherry’s Dance Hall, in West Street, were the most famous of these venues, dominating Brighton’s night-life.

Programmes for both dancehalls for the period 1929-1930, now lodged with Brighton History Centre, give a real indication of the seriousness with which dancing was taken. Open seven days a week, 365 days a year, each week offering a different motif, for example, ‘crazy week’, ‘magic week’ or ‘navy week’ (when Sherry’s was transformed into an ocean going liner). Both venues advertising top performers, like Billy Cotton and his band, ‘The greatest of all stage and dance bands’. Both venues knocking themselves out to be the best and attract the best.

The Regent Dance Hall was opened in December 1923 on the roof of the Regent Cinema. Decorated in what was considered a ‘jazz’ style, which consisted of brightly coloured zigzag and square patterns painted on the walls, large lanterns and multi-coloured lights. The Brighton Herald described the interior decoration as “like an artist’s expression of exclamation. It is jazz in its highest development. To enter without preparation into that great new hall...is to get the effect of a rocket bursting in one’s face. The hall is like an explosion of all the primary and secondary colours, flung hither and thither in a restless, intersecting criss-cross of blazing light”. Clearly no need for chemical aids to enhance dancing pleasure there!

1,500 people could dance on what was advertised as ‘the finest sprung dancing floor in the world’ or attend afternoon tea dances, cabaret, balls and take part in dancing competitions. And, a little like ‘Strictly’, the Regent had expert professional dancing partners for both sexes on hand to show amateurs the steps. For 3/6 for one lesson or 16/- for a series of five you could learn to waltz, tango, fox trot, quickstep and rumba. Keen to get everyone on the floor, their motto was, ‘if you can walk you can dance’.

The Regent’s popularity continued into the 1940s as more people than ever chose dancing as a way to escape from the reality of their lives and to have fun. Big bands, swing, the merengue, the samba, the mambo, the rumba, the cha-cha-cha and the bossa nova kept people dancing until the 1960s when changing tastes in music and dance styles brought about the Regent’s decline. In 1967 the dance hall was closed.

The rival for the title of Brighton’s premier ‘Palais De Dance’ was Sherry’s, which opened on the 11th November 1919 in West Street; an elaborate Italianate style building similar to the nearby Grand Hotel, once occupied as West Street Concert Hall where the explorer and missionary H. M. Stanley, who found Dr Livingstone in Africa, lectured in 1872. Sherry’s boasted two bands, two bandstands and a cabaret and my favourite of their claims - ‘Tea time is Sherry time’, referring to the ‘dainty’ afternoon teas they served in the dancehall where, if you paid for tea, you could dance for free.

The height of Sherry’s popularity as the Mecca of dancing on the south coast came during the Second World War when all nationalities of allied servicemen and Brighton girls kicked up their heels and jitterbugged. High energy dancing for high energy times which carried over into the post war years. Then the atmosphere in the dancehall was elevated by something different; the presence of members of Brighton’s criminal underworld – the gangsters immortalised in Graham Greene’s Brighton Rock (1938) who most certainly went to Sherry’s.

A decline in Brighton’s passion for dancing saw Sherry’s close in September 1948. It re-opened briefly after this, but eventually succumbed to being a roller-skating rink, then bingo hall until it was demolished in 1969 and remodelled as a night-club and amusement arcade.

Some of the dancing style crazes started in the 1920s and 30s glided smoothly into tradition after their ‘newness’ had faded, and some simply fading away into oblivion. Have you ever heard of ‘The Frug’ (pronounced ‘froog’) for example? Dancing was a social activity, not something enjoyed from the sofa, and dancehalls were considered great places for fun and romance. And, even in those heady days of gin cocktails and unfiltered cigarettes, they appreciated that, “For your health’s sake, Dance!” (front page Sherry’s Dance Hall programme, July 1930). 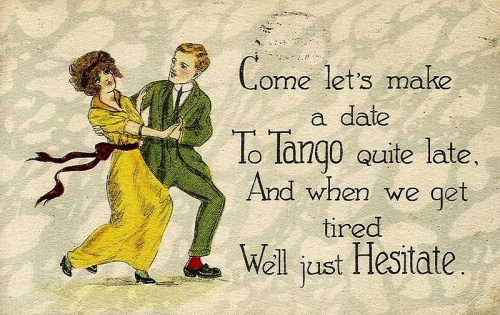 This card postmarked March 8, 1920. Text (making reference to the popular "Hesitation Tango"): Come let's make a date To Tango quite late, And when we get tired We'll just Hesitate. Copied from Wikipedia and in the public domain because the copyright has expired. 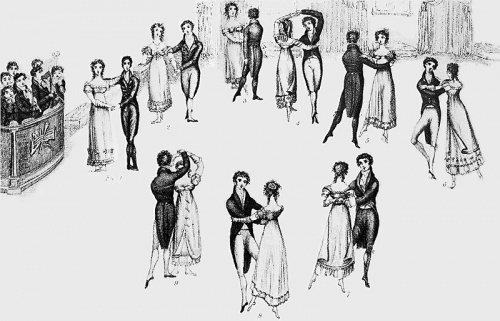 Detail from 1816 frontispiece to Thomas Wilson's Correct Method of German and French Waltzing (1816), showing nine positions of the Waltz, clockwise from the left. At that time, the Waltz was a relatively new dance in England, and the fact that it was a couples dance (as opposed to the traditional group dances), and that the gentleman actually clasped his arm around the lady's waist, gave it a dubious moral status in the eyes of some. Copied from Wikipedia and in the public domain because the copyright has expired.