Brighton: A Town on Trial The Great Conspiracy Case 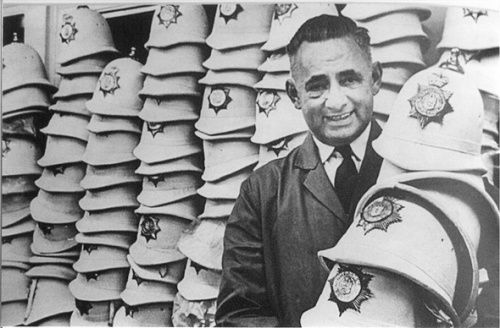 The 1950s was an interesting decade: a time of change, a move away from the drab austerity of the post-war years into a lighter, brighter world. Prime Minister Harold Macmillan went so far as to say, “most of our people have never had it so good”. In Brighton, the Promettes were on the seafront, housewives could shop in the town’s first supermarket, 200 workers produced BMW Isetta bubble cars in a factory in New England Street, slums were being cleared and plans were in place for the town’s first tower block flats.

Crime seemed to be under control and people generally believed that Brighton was a reasonably law abiding town. Statistics showed that from 1948 to 1956 crimes had decreased from 2,183 to 1,674 per annum. The number of offences cleared up rose from 43.6% to 61.3% and the number of people arrested for criminal offences increased from 453 to 638. Admittedly, there were regular fights in the dancehalls between groups of Teddy Boys, but the town’s police force could easily deal with this. They even appeared to have the violence and villainy associated with The Astor Club in Kings Road, known locally as The Bucket of Blood, in-hand.

People were, therefore, taken by surprise when rumours started to circulate about senior Brighton policemen accepting bribes and being involved with call girl and corruption rackets. They were shocked when local and national newspapers broke the news that Scotland Yard had been called in to investigate, “certain allegations of irregularities”. They were downright astounded three weeks later to read the Brighton Herald’s headline, “Chief Constable and Inspector Arrested”. This was the beginning of The Great Conspiracy Case, at the time the most intensive and highly publicised investigation ever conducted into the affairs of a British police force.

The story first came to the public’s attention on 2 October 1957 when it was disclosed to the press that officers from The Met had, for the last month, been looking into claims of bribery and corruption. The first to be arrested was Detective Sergeant Trevor Heath. He was charged with attempting to obtain, “reward for showing favour to Alan Bennett [owner of the Astor Club] in relation to affairs of the crown”. Heath was remanded in custody.

Then, just before 10 a.m. on Friday 25 October, a secret meeting took place on Brighton seafront (well secret according to the Brighton Herald!). Commander Hatherill, head of CID, and Det Supt Forbes-Leith, the senior Scotland Yard officer leading the case, “walked up to a bowler-hatted man who was leaning on the railings looking out to sea and clapped him on the shoulder”. The mystery man was Sir William Johnson, one of her majesty’s inspectors of constabulary. The men shook hands, exchanged a few words then drove to the town hall to begin a, “day of staggering events”. Less than an hour later, Chief Constable Charles Ridge, Detective Inspector John Hammersley and Anthony John Lyons, the owner of Sherry’s Bar in West Street, were arrested. They were all charged with conspiracy and at 12.45 p.m. appeared in court, where Magistrate Mr W Vokins opposed bail because of fears over witness intimidation. The fifth and final person to be arrested and charged was Samuel Bellson, a bookmaker from Hove.

Their trial began on Monday 25 November. By 7 a.m. a large crowd had gathered outside the town hall, everyone hoping to get a place in the public gallery; some, it was noted, brought along their knitting to while away the time queuing. Alongside the locals were photographers and news crews from around the world all vying for vantage points in order to get a glimpse of the defendants. David Rowland in his book Bent Cops (Finsbury Publishing, 2007) gives a detailed and insightful report of the proceedings and the 64 witnesses that were called. But in short, allegations revolved around businessmen in the town paying for favours from the police which included immunity from police raids and ability to serve drinks after hours; the payment of protection money by those involved in the operation of “call girl rackets”, including an abortionist; tipping off a well-known criminal that he was wanted by other police forces; and turning a blind eye to the activities of illegal betting houses and a known receiver of stolen goods.

After ten days, the bar owner, the bookmaker, the two CID officers and Brighton’s Chief Constable were committed for trial at the Old Bailey. There Ridge and Lyons were acquitted of conspiracy charges, but Heath, Hammersley and Bellson were found guilty. The two detectives were sentenced to five years imprisonment, Bellson got three years. Ridge did not get away scot-free though; the trial Judge’s comments were so damning of his professional and moral leadership that Brighton Council’s Watch Committee dismissed him from his job without pension. Their verdict was that he had been negligent in the discharge of his duties and unfit to hold office.

The final twist in the story is that Ridge appealed against the Committee’s decision to the House of Lords and, five years later, his appeal was allowed. Ridge v Baldwin (1964) is a landmark case in labour law, having found the Brighton Watch Committee (headed by George Baldwin) had acted unlawfully by not offering Ridge an opportunity to defend his actions, thereby violating the ‘doctrine of natural justice’. His pension was reinstated. 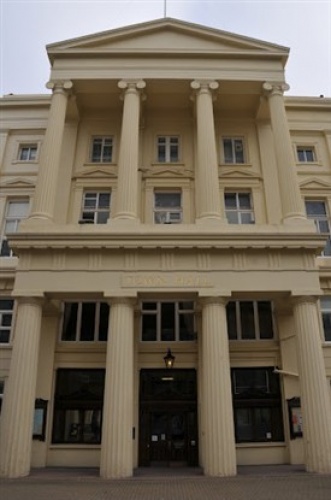 Photograph by Tony Mould. Brighton town hall. The police station and cells were in the basement, now the location of the Old Police Cells Museum 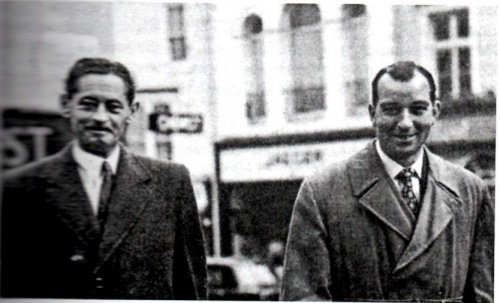 Photograph courtesy of David Rowland. John Hammersley (left) and Trevor Heath. At the time of the trial a policeman in Brighton earned about £6 for a 48 hour week. Heath, who had a taste for the good things in life, was clearly tempted by the “dark side”. Sending his children to private school on a policeman’s salary should perhaps have made warning bells ring long before the investigation.