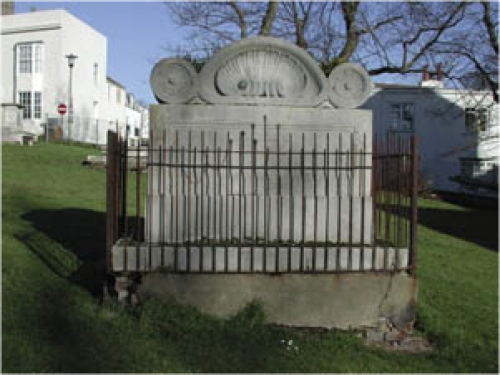 The petition to improve the Seven Dials roundabout is gathering steam. One idea put forward is to erect some form of memorial to the architectural partnership of Amon and Amon Henry Wilds and Charles Augustus Busby who designed much of Regency Brighton. And since I find myself looking largely to the past to find Brighton’s chief assets, I think that this is a very interesting idea.

The spirit and character of Brighton resides principally in its elegant squares, crescents and terraces which differentiate it from other seaside resorts along our coastline and attracts people to the town today, just as it did in Georgian and early Victorian times. The form of a crescent, Jane Austen wrote in Sandition (chapter iv), “always takes”.

Strangely though, little is known about those who were responsible for roughly three- quarters of all the best buildings in the town. In Bath the names of the elder and younger Wood have an honoured place beside Queen Anne, Beau Nash and Ralph Allen who combined to make the city and its architectural style so famous. Yet it is different in Brighton. Despite the two Wilds (father and son) and Busby building four, possibly five, squares, four crescents, nine terraces, six streets, five churches and a large number of individual private houses, their names, to a large extent, have been overlooked.

Charles Augustus Busby (or Charles Augustin Busby as he is sometimes called) was born in 1788. He was the son of Dr Thomas Busby musician and author. Charles attended the Royal Academy School of Drawing and when only thirteen showed his first design in an Academy Exhibition; this was simply called Design for a Manson. Other designs followed and in the coming years he established himself as a young and promising London architect. But in 1822 he moved to Brighton where he immediately entered into partnership with a builder named Amon Wilds.

Born in 1762, Amon Wilds started a building firm in Lewes with his son, Amon Henry Wilds, using the name A and H Wilds. They moved to Brighton in 1815 and their first important commission was the construction for Thomas Read Kemp, one of the joint Lords of the Manor, of a chapel intended as the meeting house for his newly founded religious sect. This chapel was the nucleus of what is now Holy Trinity Church, Ship Street. Soon after they built the Temple in Montpelier Road also for Kemp.

When Busby came to Brighton in 1822, he was thirty-four, Wilds Senior was sixty. Nothing is known of how they came to be associated in partnership and it is puzzling why two architects, who had each been so successful in their separate spheres, should suddenly start collaborating. Furthermore, owning to the diversity of their records, it is difficult to compare their reputations, but as Wilds had been a purely provincial architect it is likely that Busby, with a London based reputation, would have been considered the more important of the two. If so, Wilds’ name was no doubt placed first in the partnership on account of his seniority in age. Nevertheless, this was a great partnership and together the two men built the Kemp Town and Brunswick estates, which contain most of the Grade 1 listed buildings in Brighton and Hove.

Amon Wilds died aged 71 and is buried in St Nicholas churchyard in Dyke Road. His tomb is covered with shell motifs and was probably designed by his son, Amon Henry Wilds. The Ammonite capital was a favourite architectural feature of the Wilds. They first used it on a house in Castle Place owned by Dr Gideon Mantel, the geologist, and then later on buildings, which had no special geological connection, in Western Terrace, Oriental Place, Hanover Crescent, Montpelier Crescent and on individual houses in the Steine, Montpelier Road and Preston Street. The “Ammonite Order”, from which this design originally came, was conceived by George Dance, and incorporated by him onto the façade of Boydell’s Gallery in Pall Mall in 1789. It comprises pilasters, the volutes in the capitals designed in the form of ammonites or geological fossils consisting of whorled chambered shells resembling the horn of Jupiter Amon in shape. Amon Wilds and his son must have known of the existence of this Order, invented by Dance, and were probably attracted to it as much by the punning allusion to their Christian names as by any intrinsic artist or architectural merit.

Amon Henry Wilds was perhaps never as well known as his father on account of the latter’s association with Busby; nevertheless he had an independent architectural record, which was possibly even greater than his father’s. This included the design of the Royal Albion Hotel, Sillwood House, the Unitarian Church in New Road and the Victoria Fountain in the Old Steine. Wilds Junior also built many houses in Park Crescent, Sillwood Place, Waterloo Place and Cavendish Place.

It has been said that the Wilds and Busby were responsible for the transformation of the little medieval fishing village of Dr Russell’s day into the famous seaside resort of the early Victorian period. If this is, indeed, the case justice has not been done to their architectural legacy in these few lines, but some recognition may be better than none.